Voice For The Animals Coordinated the “The Cycle of Violence, From Animal Welfare to Domestic Violence” Seminar Last Week in Athens, Greece!

The Alliance For Greece and the Panhellenic Animal Welfare Federation organized this conference for the Ministry of Public Order and Security of Citizens and the Greek Police, with guest speakers from the LAPD and the Virginia Attorney General’s Office, as well as our very own Melya Kaplan (3rd from left in the above picture).

Executive Director and Founder Melya Kaplan helped educate Greek law enforcement officers about the dangers of animal abuse leading to violence against humans and taught officers at the police academy warnings signs to search for when uncovering animal cruelty. 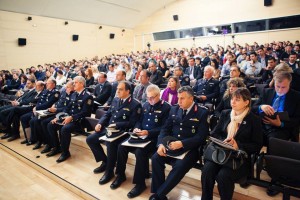 Here is a transcript of Melya’s speech:

My grandmother was born in Ioannina. Throughout my whole life, she taught me that Greece is a land of great beauty, great heart, and a great history.

The world knows Greece as the country that founded democracy which was the first fair and compassionate system of justice.  Many countries around the world have since formed their governments based on Greece’s original model.

Philosophy is also understood to be a Greek creation. Greek philosophy has influenced much of western civilization since its inception.

It is in the 6th century BC in Greek philosophy that we find the first concern for the treatment of animals. 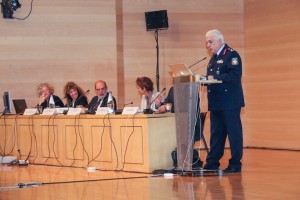 The famous philosopher and mathematician Pythagoras urged respect for animals, because he believed that humans and non-humans had the same kind of soul.

Another classical Greek philosopher, Theophrastus, one of Aristotle’s pupils, argued that non-human animals can reason, sense, and feel just as human beings do.

Plato, in his Republic (Book II), said the dog has the soul of a philosopher.

Plutarch wrote several essays arguing that animals were rational and deserving of consideration and compassion. He was one of the earliest advocates of animal issues.

And Plotinus taught that all animals feel pain and pleasure, not just humans and thus that humans had to treat animals with compassion.

The classical Greek philosophers led the way not only to compassion, but also to the roots of crime:

As the founder of the Society for the Prevention of Cruelty to Animals said in 1884:

“Nearly all the criminals of the future are now in our public schools and we are educating them. We can mould them now if we will. We may teach a child to shoot a little song bird in springtime, with its nest full of young, or we may teach him to feed the bird and spare its nest. We may go into the schools now and make boys merciful, or we may let them drift, until, as men, they become lawless and cruel.

I am sometimes asked, “Why do you spend so much of your time and money in talking about kindness to animals, when there is so much cruelty to men?” And I answer, “I am working at the roots.  Just as soon as we pour into all our schools the literature of mercy towards animals, just so soon shall we reach the roots not only of cruelty but of crime.”

The Ancient Greek philosophers were the first to understand this. And that is why we are here today.”